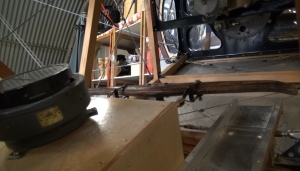 After we’d been to the air and car show at Little Gransden, we decided that we’d head out west to Shropshire to visit David Bremner in Ludlow. David is building a replica 1915 Bristol Scout aircraft, based around some original parts that he has from his grandfather’s Scout aircraft (including the original joystick and rudder bar. We first met David and his wife Sue, and co-aircraft builder Theo, when they were in New Zealand early in 2014 to inspect a Le Rhone rotary engine for the aircraft.

Our original plan on Monday the 25th (a bank holiday in the UK) was to head toward Rugby, to go and take a look at the Trucks, Tanks and Firepower show which was being held there — this being the final day of the three-day show. However when we got up we realised that the weather forecast was correct and that it was a rather grey, wet and dismal day – not even worthwhile considering trying to film anything in this sort of weather. So instead, we programmed the coordinates for our hotel into the GPS system and headed straight for the Shropshire area. 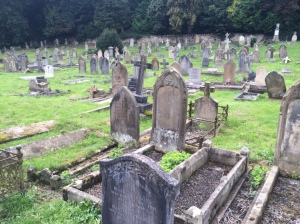 The old cemetery at Church Stretton which contains a number of Commonwealth War Graves — generally from the 1917-1922 period.

We found our hotel on the side of a hill in a small village called Church Stretton about twenty minutes drive from Ludlow, and then we headed into town for a coffee and bite to eat, and then a look around the shops and the market for a little while (in the raini). It’s a very nice little town—especially the church which is almost cathedral in size—quite impressive. Some of the other buildings in the centre of the town were built in the 14th and 15th centuries—they’re also impressive! Ludlow Castle is quite famous and being a bank holiday there was some medieval re-eanactment and competitions going on—unfortunately we only found this just as it was finishing up (and two guys were beating on one another with some rather large swords). 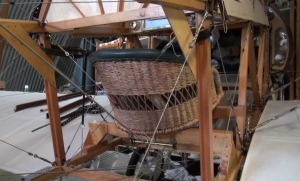 The following day we went and took a look at the Bristol Scout. Work is progressing well—the wings are on, and all but the fuselage is now covered in fabric. There’s a bit of plumbing work to be done on the engine before it can be run again, but all in all it’s looking good that the aircraft may be fully serviceable, on schedule, toward the end of 2014. We wish David and Theo all the best in getting the aircraft ready to fly in time for the 1915-2015 commemorations next year. 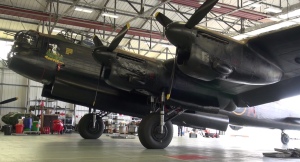 The BBMF Lancaster at RAF Coningsby.

After a couple of days out west we then had to head east once more, back to the Lincolnshire area as we were quite keen to be able to film the RAF’s Battle of Britain Memorial Flight Lancaster taking off from its base at RAF Coningsby. Unfortunately this just wasn’t to be—the Lancaster’s departure for a show at Bournemouth was repeatedly put back throughout the day due to inclement weather, and by 2pm we couldn’t afford to hang around any longer as we needed to leave the area in time to pick up some tickets for our next event in Norfolk. However we did have a chance to have a good look around the BBMF Visitors Centre at RAF Coningsby—it’s worth a look if you’re in the area.

Ludlow Castle on a wet day.