From the ships of the Royal Navy we next turned our attention to the ‘land ships’ developed since 1917 and headed off in the direction of the Bovington Tank Museum.

The A7V – the only WW1 German tank to see operational use (between March and October 1918).

Yet again this is a very well presented museum and collection, and is well worth a visit if you’re in the general (southern) area. While the museum space is packed with over 150 tanks, armoured cars and other military vehicles from the First World War through to the first Gulf War, there’s plenty of room to wander around each of the vehicles to get a good look at them, and in some cases (e.g. the WW1 tanks) you can even walk through them to get a feel for the cramped interiors that tank crews have had to put up with since they were first designed.

The collection at Bovington is certainly impressive in both size and scope. While there’s a good collection of the tanks that many people would be king to see such as the Sherman, Churchill, Tiger, King Tiger, Centurion, Panzer and so on, there’s also a number of different vehicles which are also quite interesting – the Thornycroft Concrete Moving Pillbox, a small Italian tracked flamethrower, a WW2 Japanese tank and many others. 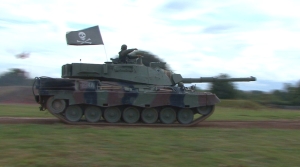 Leopard tank (at high speed) in the Bovington Arena.

One of the highlights of a trip to the Tank Museum at the right time of the year is to see them running some of their vehicles in their outdoor arena. During our visit we were treated to seeing the museums replica WW1 tank (originally built for the Steven Speilberg move ‘War Horse’) rattle around at it’s top speed of 3mph. Thereafter we were treated to noisey and loud demonstrations by several tracked scout and personnel carriers, and then the Centurion and Leopard tanks. Having a chance to see these big battle tanks of the Cold War era running up close is great and it certainly compliments the static exhibits inside the museum — it makes it a lot easier to get a sense of what each of the older tanks must have looked and sounded like in their day.

The Tank Museum also features other types of military vehicles, such as these armoured cars.

Once again Bovington is one of the museums that offers a twelve month entry ticket, and so there’s no doubt that I’ll be back here again during the summer of 2015 to take a look at all those vehicles that I didn’t get a chance to see in detail during this (first) visit. Highly recommended for anyone even vaguely interested in military vehicles, tracked or otherwise. 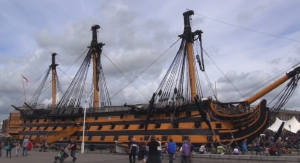 HMS Victory: Nelson’s flagship at the Battle of Trafalgar in 1805.

One of the main attractions of the area for us was HMS Victory — the flagship of Nelson’s British fleet at the Battle of Trafalgar in 1805, and so as soon as we arrived we dropped our bags at the hotel and headed down to see the ship. Having been built in the middle of the 18th Century, Victory is now over 250 years old and is one of the oldest wooden ships still in existence. Being able to have a good look around the ship both inside and out, and to get a feel for what the living, working and fighting conditions on one of these huge ships of the line was like was fascinating. It’s certainly well worth a visit if you’re in southern England.

HMS M.33: A Coastal Bombardment vessel which served at Gallipoli in 1915.

The following day we spent quite a bit of time looking around a number of the other exhibits in the Historic Dockyard area. First up was HMS M.33, a coastal bombardment vessel that served at Gallipoli in 1915 – it’s a striking little ship in her geometric ‘dazzle’ camouflage, and a good reminder that many military sailors spent much of their working lives on small vessels rather than the larger naval warships.

HMS Alliance: a Royal Navy A-class, Amphion-class or Acheron-class submarine, laid down near the end of the WW2 and completed in 1947. This is the only surviving example of the class, having been a memorial and museum ship since 1981.

A trip across the harbour on the Water Bus for a look around the Royal Naval Submarine Museum at Gosport is also worthwhile, and that was our next port of call. Be aware that the ferry only crosses once per hour, and that it’s limited to 74 passengers, so if you’re keen to check out the subs, make sure you get in the queue early, or you’ll need to wait much longer (I can tell you that from hard earned experience!). Once you’re there you can check out HMS Alliance from both the inside and out, and again it’s fascinating to see the conditions that the submariners lived and worked in on this submarine during the 1940’s, 50’s and 60s. Also at the museum is the Holland 1 (the Royal Navy’s first submarine) and a WW2 midget submarine both exhibits are do well and give you a chance to see what the interior of each vessel is like. 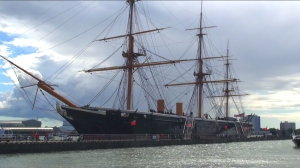 HMS Warrior: Built in 1860 the Warrior was the first all iron hulled vessel of the Royal Navy.

Once we were back across the harbour to the Historic Dockyard, the next ship to wander around and through was HMS Warrior. This ship built in 1860 was the first iron clad warship of the Royal Navy, and it’s a fantastic exhibit and well worth looking around. Powered by both steam and sail, and heavily armoured and armed (for a frigate class ship) at the time there was nothing else like it afloat. It’s interesting to compare and contrast the Warrior with the Victory. There are many similarities between the two ships which were built over 100 years apart, but there re many evolutionary changes in the Warrior, such as the armoured platting, the breech loading guns, and the steam powered engines that make it a great ship to visit in its own right — don’t miss it if you’re in Portsmouth.

Unfortunately our stay in Portsmouth was all too short, and we didn’t have a chance to look around the Mary Rose, the flagship of Henry the VIII’s fleet that sank in the Solent (the straits north of the Isle of Wight) while leading an attack on the galleys of a French invasion fleet in 1545. However one of the great features of a number of English museums is that the tickets you purchase are valid for 12 months — given that I’m gong to be back in the UK during the 2015 summer I’ll certainly be making a point of heading to Portsmouth again to have another good look around the Historic Dockyard. 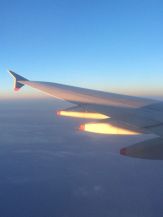 I mentioned in our last blog post that our 2014 UK Tour is probably going to be pretty hectic, and we’ve certainly found that it has been over the first few days of the tour. After a gruelling 29 hour flight half way around the world, and a couple of days spent getting over the jet lag, our tour began late last week, and we’ve now more or less found our feet and have been getting organised. We’ve already had the chance to attend a show and visit several museums that were on our ‘To Do’ lists — hopefully we’re now at the point where we can make more frequent updates here and keep you all up to date with what we’re up to on the tour.

A visit to the R.A.F. Museum in London on Saturday the 9th August was an enjoyable way to get into the swing of things. For those who have not been here before it was interesting to find that we had to pay for the car parking, but that entry to the museum itself was free. That’s certainly a great way to encourage visitors to the facility, and we’re sure that we’ll make a repeat visit if we can fit it in. It was great to be able to spend a bit of time looking around the museum’s Avro Lancaster — this being hopefully the first of four Lancasters that we’ll get to see during this trip. The only disappointment with the trip to Hendon was that the Grahame White building which houses the bulk of the World War One aircraft collection was closed. It’s currently being refurbished in order to re-open before Armistice Day (11th November) this year, though it does seem an odd timetable when it is now essentially the 100th anniversary of the start of World War One — we expected that the refurbishment would have been completed well before now.

One of the highlights of our trip was to be the WW1 Commemoration Airshow at Shuttleworth on the 10th of august, but unfortunately the remnants of Hurricane Bertha made landfall in the UK on Sunday and the show was essentially cancelled. There was a hardy crowd of 500-600 people who turned up early (before the cancellation), and they were treated to a tour through the hangars to look at the various aircraft amongst other things. Given the relatively small size of the crowd a number did come and find us to grab copies of our book and DVD — was nice to meet up with some fellow enthusiasts. 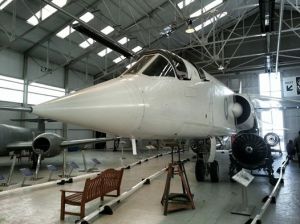 On the 11th we headed north into the Midlands and that enabled us to have a quick look around the R.A.F. Museum at Cosford, which is a great compliment to the museum in London. Don’t think that just because you’ve seen one, you seen them all — the aircraft collection at both museums is quite different (Cosford specialises in post war jet aircraft), and each is worth a visit in it’s own right.

Tomorrow it’s back down to the south coast, and hopefully some slightly warmer weather.  🙂